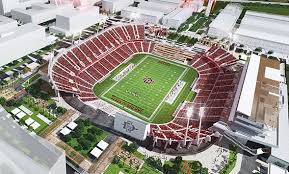 The venue is expected to be completed for the 2022 NCAA football season.

Aztec Stadium is part of a $3.5 billion SDSU campus expansion project in the Mission Valley neighborhood of San Diego. SDSU selected Boingo as the stadium’s DAS partner after a competitive review process.

“The new Aztec Stadium will be a world-class sports and entertainment venue with world-class connectivity built for the 5G era,” said Boingo CEO Mike Finley. “We’re proud to enable the stadium’s tech-forward initiatives to keep guests connected—whether live-streaming kickoff, engaging on the Aztecs mobile app or using a mobile ticket.”

Boingo’s neutral host wireless network will be designed for multi-carrier 5G and LTE coverage, including millimeter wave, a high frequency, high bandwidth 5G technology that can quickly transmit large amounts of data, such as augmented reality, virtual reality and 4K streaming. The network will be high-density to deliver seamless connectivity to guests, staff and athletes across the 35,000-capacity space.

Aztec Stadium adds to Boingo’s growing DAS portfolio of NCAA, NFL, NBA and MLS stadiums in the U.S. and expands its network footprint to more than 30 venues in California across major airports, transportation hubs, sports and entertainment venues, multifamily communities and military bases.

Revenue from the distributed antenna system (DAS) segment accounted for 38% of Boingo Wireless’ overall revenue in the second quarter of the year, down from a contribution of 40% in the year-ago period.

DAS revenue of $22.2 million was up modestly from the prior quarter and decreased 19.6% year-over-year.