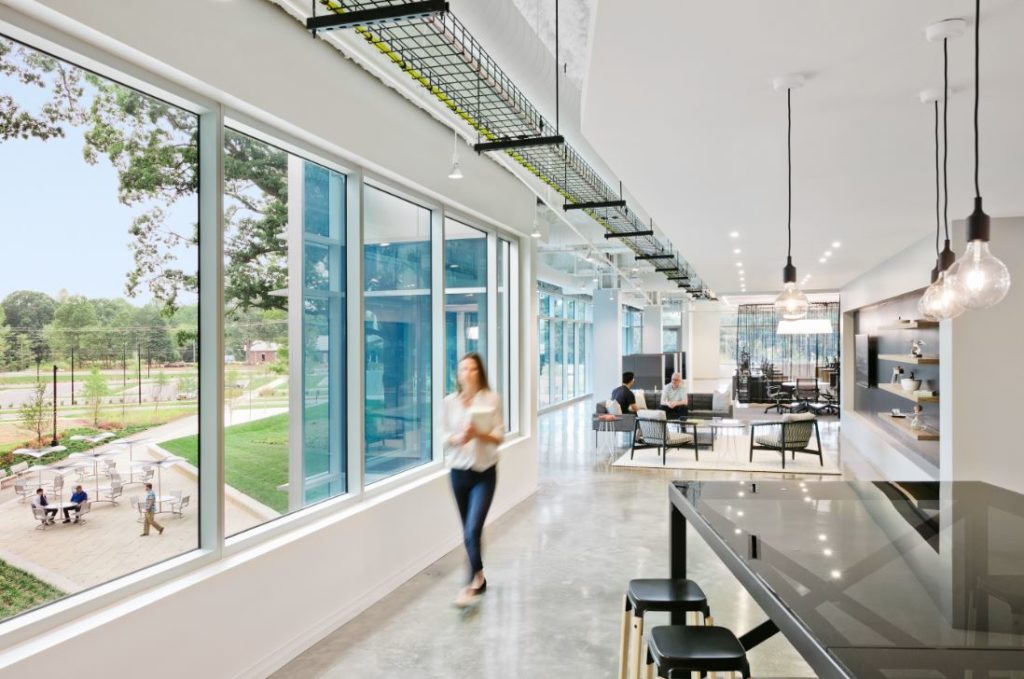 Corning Optical Communications implemented a smart building strategy at its new headquarters with the main aim of improving the firm?s productive workplace environment.

Corning deployed an all-optical network in its Optical Communications headquarters in Charlotte, North Carolina, in order to drive power and high bandwidth capabilities to the edge while reducing energy consumption and taking up less space, according to the company. Corning composite cable, visible near the ceiling?in the above 2019 photo, can run up to 2,000 feet to Software-Defined Access Nodes at the far reaches of the network.

Q: Why did Corning decide to develop a smart building project for its Optical Communications headquarters in Charlotte?

A: There are a few things to note here. We wanted to enhance our productive workplace environment and we know that network technology plays a huge role in that. We wanted our workforce to always have a connection to the network ? regardless of device ? and that connection needed to be reliable, so that our teams spend their time being productive with technology, instead of fighting with technology. We also wanted a building that would be efficient in its use of materials, energy and resources.

We chose to deploy and use exactly what we are offering in the market. We also realize the dependency upon networks, the evolving use cases, and the need to be prepared for what?s coming in the future.

By deploying an all-fiber network architecture, we were able to realize day 1 capital savings, as well as day 2 and beyond operational savings. The traditional methodology is to connect each device on the network with long runs of copper cable that all come back to a central point on each floor. Capitalizing on the reach of fiber cable enables multiple devices to connect via a single cable that can reach back to a common central point that can serve multiple floors. So, I can collapse my cabling infrastructure — using less cabling and all the apparatus and spaces it takes to support it. And the cool thing about using a fiber architecture is that it doesn’t require a complete changeover of the devices at the edge. You get all the benefits of reach, unlimited bandwidth, and space savings of fiber and the ability to connect with the existing PoE (power over ethernet) devices such as wireless access points, cellular access points, security cameras, sound masking, etc., that are prevalent in the ecosystem today.

Q: What are the main pillars of Corning?s smart building and what were the main challenges of this initiative?

The main challenges are driving a change in mindset away from 30 years of traditional methodology. The key to that mindset change is to clearly communicate to all stakeholders the substantial benefits of a fiber-deep architecture.

Q: Can you describe the main features of the deployments in order to guarantee in-building wireless coverage at the building?

We are operating on a wireless first network. So, we have a fairly dense Wi-Fi network, approximately 1 WAP per 1200 square feet, as well as a cellular network.We are using both small cells and DAS in the building, which is atypical, but we wanted to showcase both technologies.The DAS serves the first three floors while small cells are serving the top three floors.

JCI was the master integrator on the project, and they used several other integrators, each for specific applications such as cellular, Wi-Fi, etc.

Q: What are the main features of the small cells network and the DAS implemented at the building?

As I mentioned, we deployed both DAS and Small Cells in the building. We are currently supporting two carriers. We used our own signal source (SpiderCloud) for both the DAS and the Small Cell distribution. By using our own signal source, we are able to cut down on the complexity and time that it normally takes to get carrier signals in the building. Building owners are sometimes surprised to learn that the technology choices, usually reserved for later in the design cycle, can actually enhance the architecture and energy efficiency of the building itself. Technology plays such a key role now; it has a more far-reaching effect than in the past.

A: We are currently deploying many different applications on a fiber-deep, software defined LAN. Instead of running a separate layer of infrastructure for each application, we are converging Wi-Fi, Cellular, Sound Masking, Security, Building Controls, A/V — all on the same network infrastructure. Adding more applications and devices to the network is very easy due to the bandwidth capabilities and easy expansion resulting from having power and fiber all the way to the edge of the network.

Fiber, with its virtually unlimited bandwidth, satisfies the high bandwidth and low latency demands of 5G ? providing an easy upgrade path over existing infrastructure as we see 5G becoming more prevalent in buildings as the engine for expanding IoT applications.