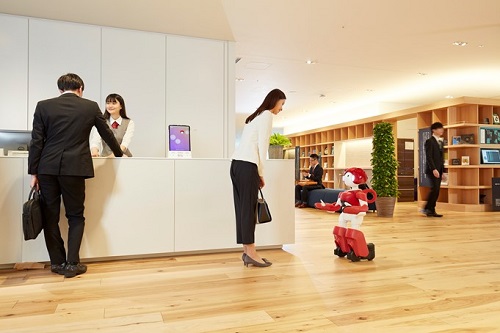 Hitachi and Hitachi Building Systems recently announced that they will launch full-scale commercial operations with its EMIEW communication robot as one of their Lumada solutions in the building field. EMIEW stands for Excellent Mobility and Interactive Existence as Workmate.

The robot provides a range of services to support works in buildings, including visitor reception, guidance and surveillance patrol services.

The companies said that they will launch domestic sales in Japan—primarily to offices, hospitals and care facilities—as of this week, with a lineup that includes the new model EMIEW4 humanoid robot, which offers increased practical performance in comparison with the previous model due to its features such as continuous operation achieved through the addition of automated recharging function and improved mobility performance due to enhanced sensing capabilities, and the desktop type EMIEW-TT, which enables users to converse with an EMIEW avatar using a tablet device and dedicated cradle.

The Japanese company noted that there are increasing demands for workplace reforms, due in part to the shortage of workers caused by issues such as declining birthrate, aging society and shrinking population. Hitachi said that these demands have accelerated the movement toward the realization of smart buildings that improve the work efficiency in building and comfort and convenience for users through the utilization of digital technologies.

Hitachi and Hitachi Building Systems have so far conducted Proof of Concept (PoC) testing and delivered the professional services, including visitor reception and customer service at a variety of workplaces such as offices, using the EMIEW3 communication robot and a “remote brain” robotics IT platform, which had been developed in 2016.

Based on insights gained through these efforts so far, they have now developed the new model EMIEW4,  which offers greatly increased practical performance in terms of operating time and mobility performance that will be demanded at the time of full-scale introduction.

Features of the EMIEW4 include enhanced mobility performance which enables autonomous operation over a wide area, multilingual voice conversation capabilities, and automated recharging function that facilitates continuous operation without the need for battery changes, according to the company. “The new model contributes to alleviating the problem of the shortage of workers by enabling services to be carried out without breaks to match the time of day, for example by performing visitor reception and guidance duties during the daytime and surveillance patrol duties at night, at locations such as offices, hospitals and care facilities,” Hitachi said.

The robot comes with a camara, a LED screen, speaker, microphones, 3D distance imaging sensor as well as proximity sensors.

Hitachi also said that the EMIEW-TT, which was developed in October 2018, will also be added to the product lineup and supplied to customers who require only conversation function. EMIEW is also capable of system integration with building facilities such as elevators and security equipment via its robotics IT platform.

“In the future, Hitachi will aim to have EMIEW increase the efficiency of building facility management by leveraging data collected inside buildings, and take on the role of a touchpoint connecting people with building facilities; achieving the creation of smarter buildings where it is possible to call an elevator, for example, by speaking to an EMIEW.”