If somebody told you 20 years ago that lighting would become one of the most prolific of smart building technologies in the world today, no one would have believed it. However, today through the use of internet of things sensors and devices intelligent LED lighting technology is going far beyond the provision of just illuminating buildings to provide energy savings and is rapidly becoming a means for managing the entire building?s infrastructure. At the center of this transformation is a technology called Bluetooth mesh.

Before we can fully understand what Bluetooth mesh is, and how its used in smart lighting systems for commercial office buildings, we need to understand the evolution of LED lighting.

It?s no question that buildings, regardless of size, need lighting- so the revolutionary adoption of LED lighting fueled by significant energy savings is not surprising. Now, however, the proliferation of IoT sensors and devices has led to a second lighting revolution, and IoT vendors are equipping LED systems with sensors that can detect fire, smoke, carbon dioxide, specific sounds, motion, and even facial expressions to yield massive benefits to large enterprises in many industries.

While most of us have been using Bluetooth in our cars or for fitness devices, the technology has found an altogether new application in smart building lighting systems. Today virtually anything that can be measured and detected by a sensor can be attached to LED lights. However, for these sensors and systems to operate effectively the industry needed two things: first, a way for these sensors to communicate with one another, and second an central infrastructure with two-way communications that could be managed from a dashboard or platform- and here enters the value of Bluetooth mesh networking.

What is a Bluetooth mesh network?

A Bluetooth mesh is a networking structure for Bluetooth LE devices that deploys low-energy networking technology to interact and exchange information among themselves. A mesh network is a type of network topology where every single node is connected with one another, and can seamlessly relay data for the network to connect devices and transmit information. It is commonly used in beacon technology, industrial automation, and smart home devices.

In mesh networking, devices actually include several nodes, one of which acts as the gateway for your net connection and others that collect signals. Compared to a traditional network where each node communicates with a single access point or a hot spot, all nodes in a mesh network communicate with one another which results in amplifying the signal and extending its range. While range extenders can also achieve similar results, mesh networking does not deteriorate network speed and cause a slow down in connection.

While power-over-Ethernet is gaining acceptance to both power and connect LED lights by using category 5 or 6 cables that eliminate the need to convert DC to AC these technologies are best suited for installations that already have Ethernet cabling. For building owners who do not want to rewire an entire building, Bluetooth mesh is an alternative option.

Many LED lighting manufacturers such as LEDVANCE are now using Bluetooth mesh to create an interconnected lighting system using the SIG-qualified Bluetooth mesh standard which ensures that various components such as lighting switches, sensors, and software are made using universal standards and can be used with one another.

Bluetooth and Bluetooth Low Energy communicate by sending short wireless bursts of data, and the mesh expands this communications infrastructure to hundreds or thousands of devices or nodes that share connections with other devices in the same vicinity. Bluetooth technology was originally developed for point-to-point connectivity to enable communication between one sensor and another or with the network but Bluetooth mesh uses a network strategy that provides many-to-many connections, that communicates with all the nodes within range all at once. The mesh is capable of sharing data at rates of more than 1 Mbps, and the mesh?s design eliminates a single point of failure, so if one node fails, the data is automatically rerouted over another path. Its structure also makes it easy to add and remove nodes without disrupting connectivity.

For smart lighting and building controls, Bluetooth mesh also enables two-way communications, which allows for both tuning and monitoring of devices and sensors can join the network and report data back to the centralized system or dashboard. Using smart LED drivers and Bluetooth mesh nodes facilities managers can create a building-wide infrastructure to monitor and control a facility by area or circuit. 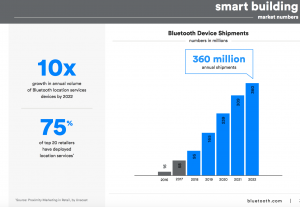 No doubt the ability to intelligently control lighting, HVAC, security, and mapping tenant occupancy use offers significant savings to building owners. However, a now lighting systems can also function as essential platforms to further enable point-of-interest solutions, indoor navigation, asset tracking, and space utilization inside of smart buildings. For these reasons, Bluetooth mesh is gaining traction in both retail stores and hospitals where its increasing use is paving the way for early adoption in the smart building sector.