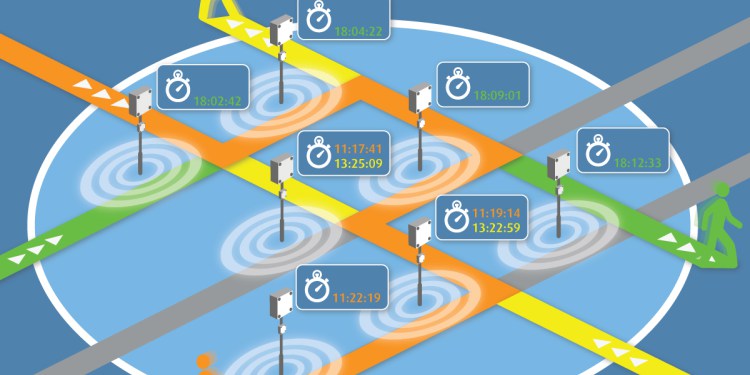 With this newly deployed sensor network, Netherlands Railways will get data on passenger flows, which can be used to improve traveler experience and optimize the stations? operations.

Passengers are no longer simply passing through railway stations; they work, hold meetings, shop and eat there. At the same time, passenger numbers have been increasing steadily in the Netherlands. Expanding stations? capacity to address these challenges is however at best highly expensive, at worst a no-go because the busiest stations tend to be located in dense urban environments. In order to be in a better position to cater for new passenger requirements and at the same time cope with the growing flow of passengers, Netherlands Railways, the largest train and station operator in the Netherlands, has entered an agreement with Denmark-based Blip Systems for the deployment of a bluetooth/wifi sensor network.

The ambition with the new sensor network is to improve traveler experience by reducing bottlenecks, optimize operations and generate new revenues by modeling traveler behavior. The size of the investment is around ?100,000 ($112,000) per station, depending on how detailed the data should be. ?Postponing a rebuild for two years and then having the right layout when you rebuild a station makes the investment worth it,? said Kim Hermannsen, partner and engineer at Blip Systems, to Industrial IoT 5G Insights.

There are two main benefits with the sensor network Blip Systems has deployed. On the one hand, stations can postpone rebuilds. On the second hand, they possess the right information about passenger flows once they decide to actually rebuild. ?Stations are trying to postpone investments in the billions of euro range to rebuild stations. Then, they need to optimize the station when they rebuild it. It is important to have data on how people are moving within the station to rebuild it in the best possible way,? said Kim Hermannsen.

Blip Systems deployed?a pilot sensor network at one station in the Netherlands in 2011 and 2012 and has since deployed the solution to Amsterdam Centraal, Amsterdam Airport Schiphol train station, Utrecht Central station and Leiden Central station. ?In total, we have installed around 100 sensors.?

Sensors that can detect mobile devices via wifi and bluetooth have been installed?at strategic points at?the stations. These are able to re-identify devices and measure movement patterns, travel times and visitor occupancy. ?The primary product used in the rollout is Blip Track, a sniffer that detects devices that have wifi or bluetooth enabled. At stations, these are normally mobile phones,? explained Hermannsen. The basic idea is to sniff the origin and destination of passengers in the train station and the duration of their stay at the various locations?within the station. ?The systems lets you know how people move around inside the station.?

There is one problem though: some people do not carry a phone with bluetooth and wifi switched on. To get an accurate picture of the entire passenger flow, Blip Systems has therefore installed people counters taking infrared images on some selected entrances. ?The accurate people count combined with the sensor data gives us a true picture of the station.?

Kim Hermannsen underlines the fact that the solution does not send or track any personal information. It simply monitors the number of mobile phone signals in a given area. ?First of all, in the Netherlands, you are not aloud to store bluetooth addresses very long. This is why we encrypt the address in the sensor and send it to a central server where it is encrypted again. And every night we change the key for encryption. We can never track the same device two days in a row and because it is encrypted and hashed nobody else can do it either. We are interested in the flow of people, not in the individuals. Addresses are not related to an individual in any way,? said Hermannsen.

Blip Systems? sensor solution has already been deployed in more than 25 international airports around the world, including Schiphol Airport in Amsterdam, JFK Airport in New York and El-Prat Airport in Barcelona. It has also been implemented in road traffic in Switzerland, New Zealand, USA, UK, Denmark, Sweden, Norway, Canada and Ireland. A number of ports and amusement parks have also rolled it out. ?The next phase of this project is about rolling it out at other train stations. We know now what we want to measure: movements at?entrances, stairs, shops, the duration of the passengers? stay, the occupancy of platforms or other areas,? said Hermannsen.

Blip Systems is delivering the physical system and Royal HaskoningDHV? is doing the data analysis together with Netherlands Railways.

Google self-driving car project announced it would establish a self-driving technology development centre in the Detroit suburb of Novi, MI. ?Many of our current partners are based here, so having a local facility will help us collaborate more easily and access Michigan’s top talent in vehicle development and engineering. At this 53,000 square feet development center, our engineers, working with local partners, will further develop and refine self-driving technology. One of the first tasks will be to ready our self-driving Chrysler Pacifica hybrid minivans,? Google wrote on Google+. Google will be moving in throughout 2016.

Developers: Twilio and T-Mobile team up on cellular communications platform

Twilio, the cloud communications platform for developers, is teaming up with T-Mobile on a communications platform that enables developers to easily program cellular connectivity. ?Before today, building solutions with cellular connectivity has been largely out of reach for developers. In the case of IoT, builders have had no choice but to resort to Wi-Fi or other short-range connectivity, which inhibits adoption due to added configuration needs and lack of ubiquitous coverage. From an enterprise IT perspective, the loss of control IT departments face when mobile phones and tablets are outside sanctioned phone systems has prohibited innovation,? Twilio wrote in a statement. Twilio Programmable Wireless will be available in the fourth quarter of 2016. Pricing will be based on volume, starting at $2 per SIM per month and $0.10 per megabytes metered across a pool of devices.

When it comes to smart cities, Sri Lanka means business, megapolis business to be exact. Sri Lanka?s Ministry of Megapolis and Western Development plans indeed to transform the entire Western Province into a Megapolis area. In order to do that, the Ministry has signed a Memorandum of Understanding (MoU) with Siemens. Siemens will offer expertise and best practices within the area of smart cities.

The Global IoT healthcare market is set to reach a value of nearly $410 billion by 2022, according to a new report by Grand View Research. Market drivers include the introduction of technologically advanced connected medical devices, the penetration of smartphones, and the use of software automation, the analyst firm stated. ?Increasing prevalence of chronic diseases such as heart failure, obesity, diabetes and hypertension are boosting the demand for technologically advanced medical devices. The new generation connected medical devices enable real-time patient monitoring and help the medical professionals to swiftly respond to the patient needs.? Medical devices is expected to grow fastest, at a CAGR of 28.3 percent, through 2022.

Tele2 to provide 1-Fleet Alliance with IoT services across Europe