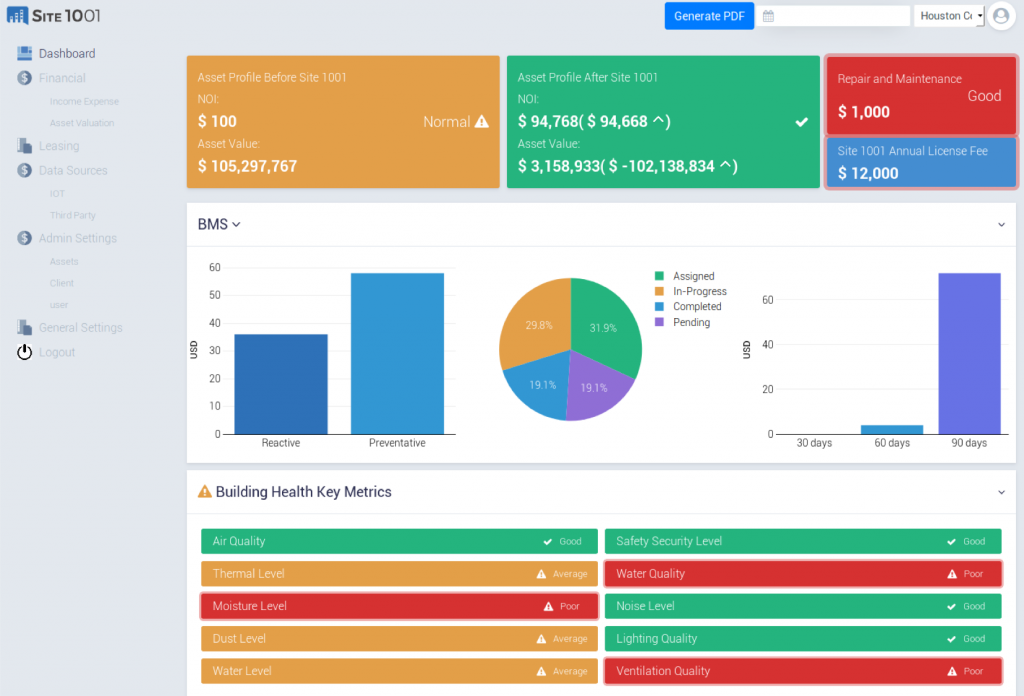 Imagine if you could have an entirely digital record of your commercial real estate building from blueprints and design drawings to records and recommendations about how to best maintain your building for optimal asset valuation. Now, Site 1001, a big data platform for smart buildings, has achieved just that. ?

?It?s a Carfax for buildings. When you buy a $40,000 car you get a Carfax that tells you everything, but when you buy a $40 million building you get the Realtor?s word and not much else,? said Cleve Adams, CEO of Site 1001. ?

?It?s simple” if an owner maintains the building at an optimal level and follows the builder?s recommendations then the value of the building should be higher. Just like valuation of a car with a Carfax is 20% higher in sales price,? Adams said.

Adams says the idea came to him after he came across a Kansas City general contractor who had created a software program to track architectural drawings for commissioning and handover.

?Since the beginning of time, after building a 40-story gleaming glass tower you get a truckload of documents in commissioning and handover. ?Five years ago that became a thumb-drive and have a nice day. But if building owners actually operated the building the way the builder suggested, an owner could save 20%-30% in total cost of ownership. For me this was a big win,? said Adams, a serial entrepreneur who has raised more than $80 million in funding from tier-one venture capitalists.

Adams said he realized that it was an opportunity to build an IoT orchestration platform and quickly hired four data scientists to work on Site 1001’s software.

The platform analyzes data to find anomalies and runs predictive maintenance scenarios to provide owners with recommendations about how to optimally maintain their buildings and assesses value based on the condition and performance of its assets.

A common problem with maintaining building records is that while buildings last years, people don?t. The loss of information from staff turnover often comprises the optimal functioning of buildings risking the ability for owners to maintain the building?s optimal health.

The idea has been a big win for Adams who says it is solving a $1 trillion problem for the insurance industry. ?

Site 1001 now has an ecosystem partnership with Aon plc, one of the world?s largest issuers of commercial real estate insurance, which is introducing the company?s software to their clients and offering them a discount based on their building health score.?

Adams says the Site 1001 big data platform has also received interest from both Amazon and Cisco.

Site 1001?s platform is currently deployed in more than 10 million square feet, including by companies like CBRE and more than 75 data centers across the U.S. The company also has place data on more than 4,000 buildings, their OEM products and 99% of all the equipment in buildings.

This place data is used to train algorithms for the company?s artificial intelligence platform Skylight AI, which the company launched last week at the Consumer Electronics Show, which enables owners to compare historical data and track ROI after system upgrades and compare them against other buildings to justify higher occupant and lease fees and better place tenants.

Site 1001 plans to initiate a $20 million Series B funding round later this year?to expand its existing engineering and development teams and sales in global markets after raising an initial $17.3 million in Series A funding. ?