You are here: Home / 5G / Telefonica to provide 5G coverage in Spanish stadium 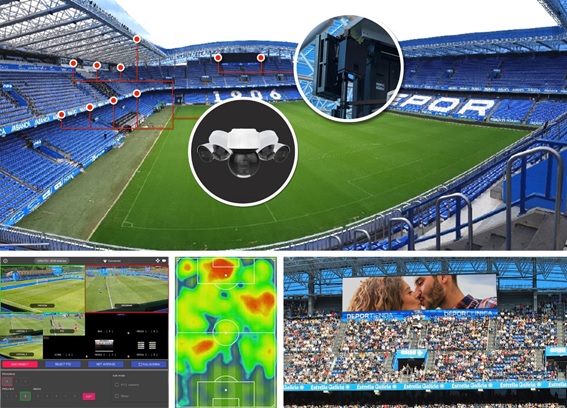 Spanish carrier Telefonica announced that it will deploy 5G at the Abanca-Riazor stadium in A Coruña, Spain.

The venue, home of the Real Club Deportivo football team, will become the stadium  with the “most complete” deployment of 5G coverage and use cases in Europe, Telefonica said.

The main functionality will enable the live broadcasting of sporting events with automatic production based on edge computing and artificial intelligence, but there will be additional services such as KissCams, heat maps through augmented reality and multi-camera TV. Spanish firm cinfo is also responsible for some of these additional use cases aimed at increasing spectator participation in the stadium.

Telefónica has installed a dedicated 5G network that includes 5G coverage in both the 3.5 GHz band and millimeter frequencies, ensuring bandwidth levels of several gigabits per second and ultra-low latencies, the carrier said.

Telefónica added that it has also deployed an edge computing center in A Coruña, to host cinfo’s tiivii solution for production and automatic TV broadcasting — which the carrier said is capable of performing game analysis in real time, tagging plays, and orienting and switching the cameras to generate a signal made suitable for live TV.

Ericsson technology has been used for the network deployment, including one of the world’s first millimeter radio units in the European 26 GHz band, as well as 3.5 GHz radio and 5G network cores in both non-standalone and standalone technologies.

Additionally, Vodafone has collaborated to be able to use occasionally the spectrum of both operators jointly in the 3.5 GHz band, in a series of tests aimed at finding out the maximum possible potential in this central frequency band, as a previous step to the use of millimeter bands.

The European operator said that 75% of the Spanish population will have access to 5G by the end of the year.

Telefónica said that it is initially launching 5G services thanks to a technology that combines the deployment of NSA (non-standalone) 5G and DSS (Dynamic Spectrum Sharing). Telefonica said it will launch a SA (standalone) 5G network when the technology becomes “fully available” after standardization.

The operator is offering this service through spectrum in the 3.5 GHz  and 1.8-2.1 GHz bands.