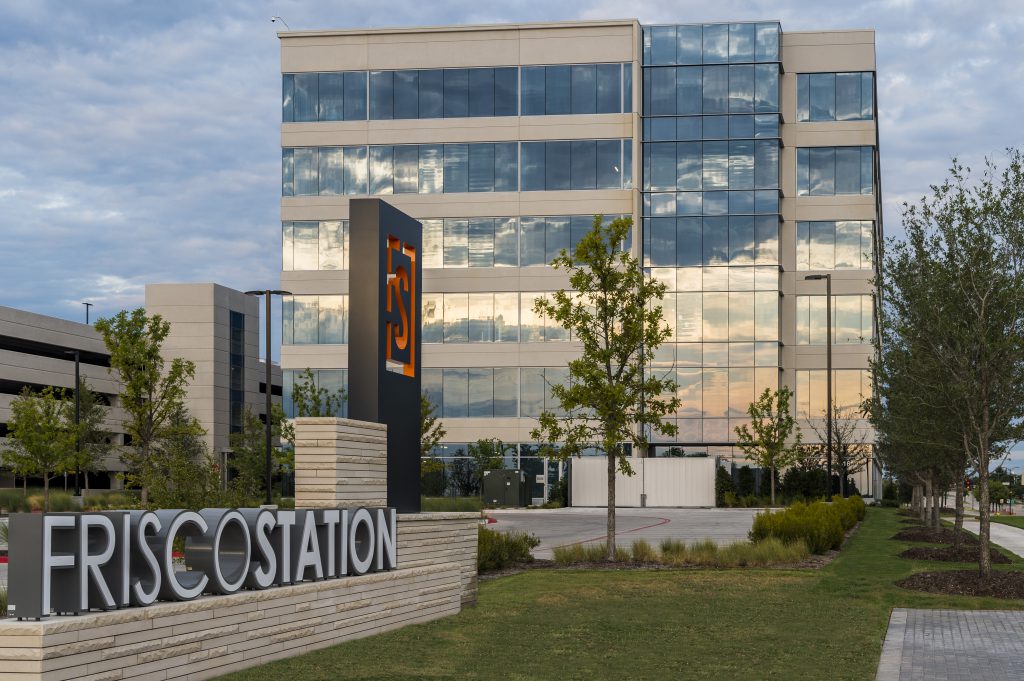 Located just outside of Frisco, Texas’s North Platinum Corridor is a private development built with AT&T’s 5G evolution technology and is heralded as the most connected community in the nation.

Frisco Station, a 242-acre mixed-use comprised of commercial office, residential, medical, retail and restaurant district is a massive 30-acre park with free public Wi-Fi built by developers VanTrust and Hillwood and landowner Rudman Partnership. It’s is poised to become the most future-proof property development in the United States.

“Future-proofing is what this project is all about,” said Robert Folzenlogen, senior vice president of Hillwood. “There is a new norm for digital connectivity being established from both a tenant pipeline demanding higher data requirements and users whose lifestyles are deeply connected to their hand-held smartphones.”

“As a master developer, I believe that digital connectivity will become just as vital to a thriving community’s infrastructure as building roads, water and sewers,” Folzenlogen added.

Digital connectivity is critical to infrastructure

With deployments of wireless small cells, fiber-based internet service and Wi-Fi, Frisco Station’s $1.5 billion masterplan will have the most advanced digital infrastructure of any development to date.

And with the first of its two commercial office buildings, now 97% leased by Kimley-Horn, Altair Global, Fiserv, and others, Hillwood’s Frisco Station digital infrastructure has certainly had no trouble attracting tenants.

“The response from tenants has been overwhelming[ly] positive whether it’s a choosing a site to build a new campus or in an existing building. Data-heavy companies are relieved to know that they don’t have to update telecommunication systems any time soon,” Folzenlogen said.

However, for Folzenlogen, all this infrastructure doesn’t mean anything unless you do something with it. He says he wants to look beyond the need for high bandwidth, video streaming, and fast internet to find ways to better the lifestyles of the 20,000 residents who will live work and play in Frisco Station through smart technology and applications in the future.

And when it comes to the future, a lot is going on at Frisco Station. Hillwood and Uber have plans to build a transit station where people can board an urban air taxi that shuttles them through the skies, and self-driving cars may roll out around the development to pick up and drop off people.

Silicon Valley-based Drive.ai has been testing its autonomous vehicles by driving around employees of Hall Park, a nearby office campus, for nearly six months. Smart city traffic management applications are expected to remain an area of focus the developer as the use of autonomous vehicles continues from pilot to deployment stage.

“For years smart tech has been driven by municipalities and their needs such as traffic lights, and municipal management systems. We are looking at what things we can do for our community from traffic solutions to health and wellness outcomes to provide a seamless set of applications that ties they way live, work and play,” said Folzenlogen.

In a change from the traditional ways municipalities think about developments, the Frisco Station will have an increased focus on its occupants and users.

Hillwood has plans to use smart technology to better health and wellness outcomes for the community’s occupants across various age groups. Starting with its 30-acre park outfitted with hiking and biking trails that digitally integrates with the entire development to bringing wearable fitness technology and resident’s physical activity together to create a healthy community to offering lifestyle restaurants and improved air quality to achieve better health outcomes both indoors and outdoors.

In the next few months, Frisco Station’s second office building will be going vertical while a 25 -story residential tower will soon be topping out, two new hotels Marriott and a Resident’s Inn and programming and events at 30-acre park critical to health and wellness initiatives are expected to commence.