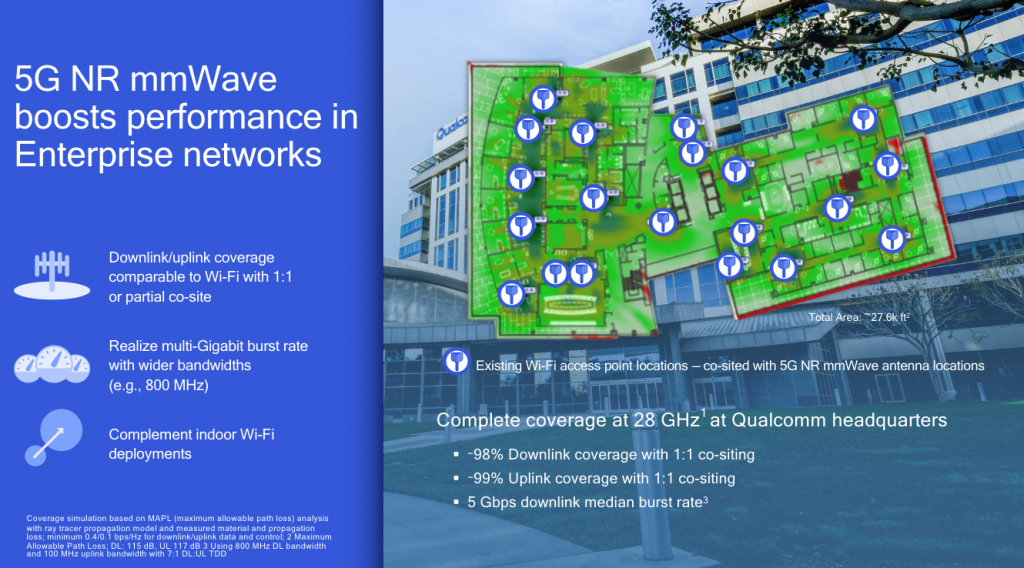 HONG KONG–Millimeter wave frequencies are a key to delivering the multi-gigabit-per-second throughputs expected as 5G matures. As operators stand up outdoor 5G networks, radio site densification is necessary to overcome the limited propagation characteristics of bands like 28 GHz and 39 GHz. But this outdoor challenge could prove to be an in-building boon, according to Qualcomm’s Rasmus Hellberg, senior director of technical marketing.

To a limited extent, operators can deliver some degree of in-building cellular coverage using an outdoor-in approach where the macro layer, particularly in lower bands, can penetrate buildings. That doesn’t hold up with millimeter waves. And therein lies the opportunity. “The idea is that we can extend millimeter wave to indoors with private 5G networks,” Hellberg told attendees at Qualcomm’s annual 4G/5G Summit. “We can re-use the same spectrum indoors. There’s no propagation between indoor and out.”

Hellberg described the ability to co-site indoor 5G radios with existing Wi-Fi access points inside an enterprise or industrial facility. At Qualcomm headquarters in San Diego, the company simulated the use of 28 GHz spectrum to provide in-building 5G coverage. With the co-siting model, they saw 98% downlink coverage, 99% uplink coverage and 5 Gbps downlink median burst rate. At the cell edge, the test yielded around 320 Mbps.

“We looked at all the Wi-Fi access points we have today,” Hellberg said, “then we added in millimeter wave at the exact same points.” Based on the results, “It’s a big opportunity to drive millimeter wave indoors as a private network.”

In terms of business model, and depending on the spectral regulatory environment, an enterprise or industrial stakeholder could potentially control their own millimeter wave spectrum. Alternatively, an operator that controls the spectrum could dedicate a portion to private networks or provide a turnkey solution as-a-service.

Hellberg’s colleague Dean Brenner, senior vice president of spectrum strategy and technology policy, elaborated on how to maximize in-building spectral use by following a space-based, rather than time-based approach.

In the time-based scenario, four hypothetical access points “would use the spectrum one-fourth of the time. What that means is each access point has to be quiet three-fourths of the time. Only one of the four gets to use the spectrum.” But as 5G NR and attendant technologies like multiple-input, multiple-output come to the forefront, there’s a more pointed emphasis on beamforming–using narrow, targeted RF beams that can track user equipment.

“We thought, what if we share the spectrum a different way,” Brenner continued, describing the use of beamforming so four access points are operating in different directions. “Everyone could transmit on the spectrum and receive on the spectrum. When we do that, we get a…much better user experience. We call it look-before-talk, not listen-before-talk.”